For the Love of Corporations

Corporations are art, too.

If a contemporary artist wants to be successful in the art market he needs representatives, sellers and promoters like gallerists, shareholders like museums and collectors and a corporate structure to not be him/herself anymore, reducing liability – in short, a company. All for the love of the invention of corporations who serve exactly that purpose: to invent a new legal persona.

The first American corporations were developed in the 1790s, almost instantly becoming key institutions in the young nation’s economy. Although corporations existed in Europe in the early 19th century—particularly in Great Britain and the Netherlands—no country took to corporate development like the United States. (investopedia.com)

Businesses of course, have been around for a while. The oldest continuously surviving business, until recently, was Kongo Gumi, a Japanese temple construction business founded in 584 AD that finally closed its doors in 2009. Guilds and banks have existed since the 16th century. Trading merchants, who raised capital to fund individual ships or voyages, often with some royal patronage, were also not a new phenomenon.  What was new was the idea of a publicly traded joint-stock corporation, an entity with rights similar to those of states and individuals, with limited liability and significant autonomy (even in its earliest days, when corporations were formed for defined periods of time by royal charter).

This idea morphed a lot as it evolved (most significantly in the aftermath of the East India Bubble), but it retained a recognizable DNA throughout. Many authors such as Gary Hamel (The Future of Management), Tom Malone (The Future of Work) and Don Tapscott (Wikinomics) have talked about how the traditional corporate form is getting obsolete.

This history doesn’t really stand out in sharp relief until you contrast it with the behavior of modern corporations. Today, we listen with shock to rumors about the backroom influence of corporations like Halliburton or BP, and politicians being in bed with the business leaders in the Too-Big-to-Fail companies they are supposed to regulate. (see excellent article by Venkatesh Rao, 2011 https://www.ribbonfarm.com/2011/06/08/a-brief-history-of-the-corporation-1600-to-2100/)

A corporation is a legally distinct entity that has many of the rights attributed to individuals. These rights include the ability to enter into contracts, take out loans, sue others, be sued, own assets, pay taxes, and so on. A corporation is formed when individuals exchange consideration (usually in the form of cash) for shares of the corporation, which in turn creates a right to a portion of profits.Generally, the losses incurred by a shareholder of a corporation are limited to the amount invested; this concept is known as limited liability. Limited liability allows individuals to avoid personal liability for a business entity’s losses, thereby allowing risk-averse individuals to assume risks they otherwise would not have undertaken. Corporations also allow individuals to pool resources to achieve goals that would be unattainable by a person acting in an individual capacity, and can last longer than an individual’s lifetime. (see https://news.law.fordham.edu/jcfl/2018/11/18/a-brief-history-of-the-corporate-form-and-why-it-matters/)

Therefore, in the performative process to create a new legal entity for one artist, I had to legally exclude myself from the law of making contracts with myself, a act which is forbidden to citizens in Germany § 181 of BGB which states:

The notary and me signed the exception from this German paragraph in a most normal and mundane way. See the certified roll of documents: 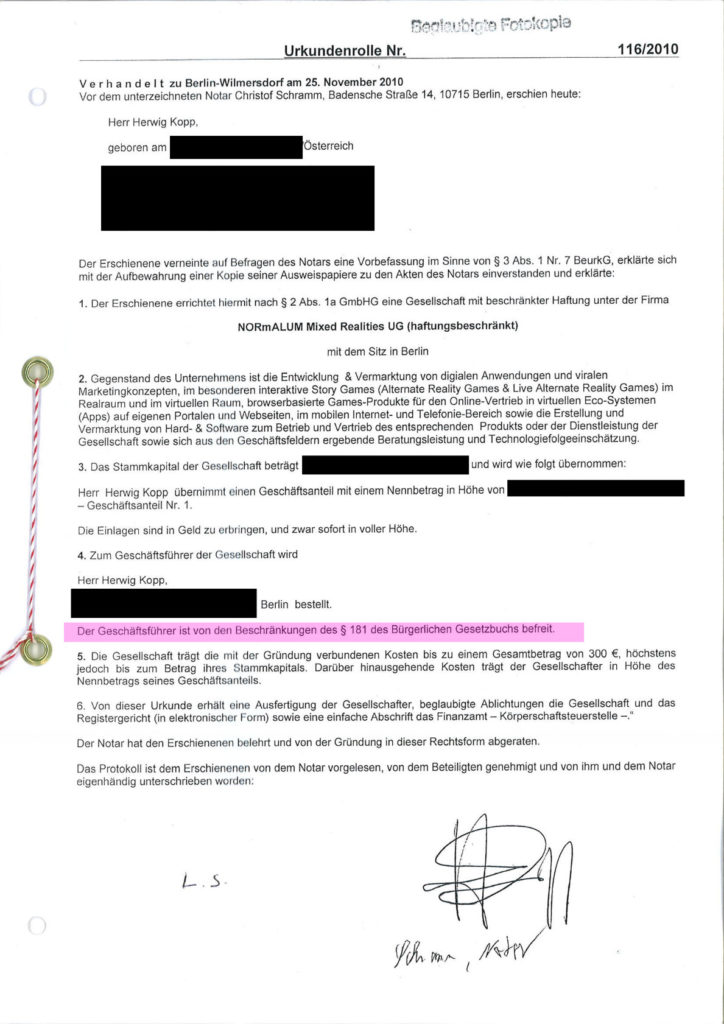 In 2016 Vice magazine caught up with the “trend” and called out this vice of mine: in the article by Emerson Rosenthal:

Artists Are Corporations Too

Unlike Takeshi Murakami’s Kaikai Kiki Co. or legal constructs behind artists like Damien Hirst, Jeff Koons, Heinz Mack,  Anselm Reyle, Jennifer Lyn Morone™ Inc. or Émilie Brout & Maxime Marion with Les Nouveaux chercheurs d’or. I in contrast steer this company like a R&D lab, rather than producing and building art. The art can be interpreted as the performance to maintain that structure for more than 7 years, like a sculpture. Its scope changes with my interests and focus on technology, storytelling, transmedia, games, publishing or music. The output and products are the maintenance, the books, the accounting the legal challenges, the CI and CD, the logo and business cards, appearing in industry fairs and events as a representative of NORMALUM, not as me, myself. Any product being made is NOT to be considered an artwork, but a commercial item.

The difference may lie in the eye of the audience, the beholder.